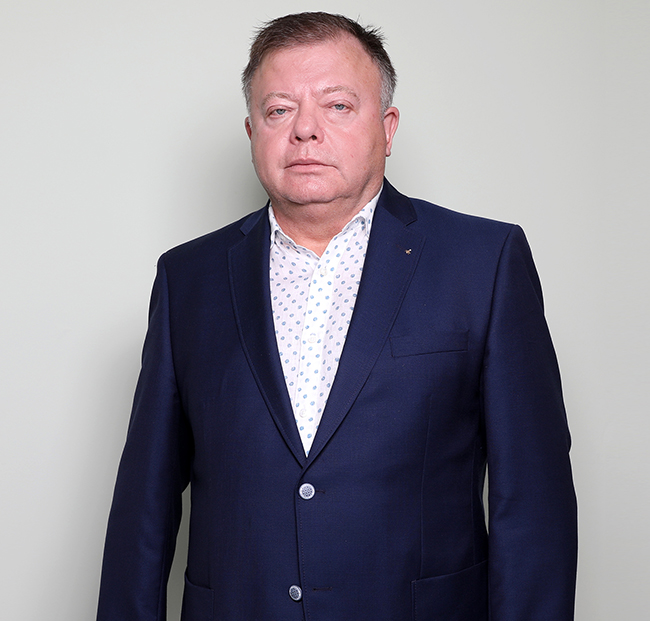 “Invest with good intentions and with trust in the people!”

Stoyan Pantaleev Stoyanov is the founder of Eurosped AD — the first freight forwarding and logistics company in the country after the big political change in 1989. He is also the Chairman of the Board of Directors and the Executive Director of Eurosped Group. Born in Reselets near Cherven Bryag, the region of Pleven, he graduated from the University of National and World Economy with master degrees in Labor Economics and Transport Economics.

Stoyan Pantaleev Stoyanov is one of the founders of the Union of Freight Forwarders in Bulgaria, and he has been nominated twice for Manager of the Year. In 2016, he became 60. In that same year, the company celebrated its 26th anniversary.

Eurosped is represented in seven main hubs in the country with an overall covered warehousing and office area of more than 48,000 square meters. In addition, Eurosped operates with a network in Europe and the world of over 500 logistics partners, while its customers number over 20,000.

First developed by Stoyanov, and then, since 2002, by him and his son working together, Eurosped boasts today of over 200 highly qualified colleagues who can deliver by land, water, or air, light-weight and heavy-weight shipments, and shipments of every kind to any destination in the country and abroad. That is the real reason why the company has become one of the leaders in forwarding and logistics, entirely in the service of thousands of customers, both in the country and abroad. 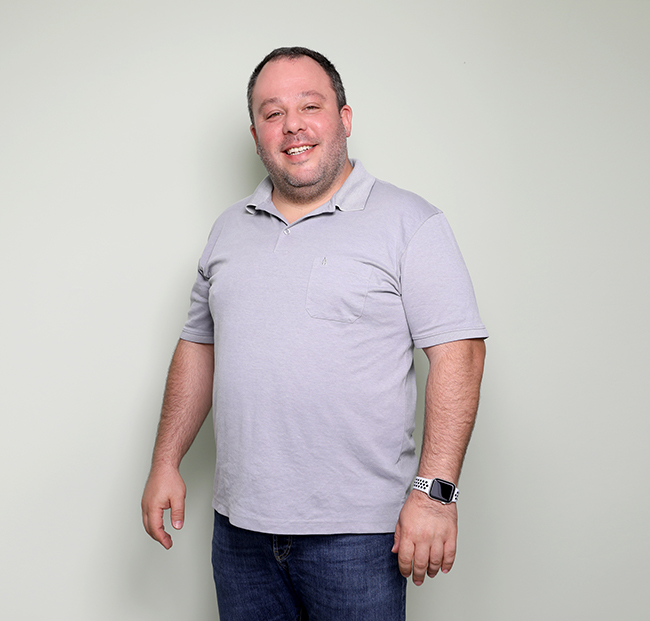 “A team is motivated by trust, encouragement, training, and personal example.”

Iavor Pantaleev is a trade director (Prokurist) and a member of the Board of Directors at Eurosped Group. He manages the sales, warehousing, and 4PL activities.

He completed his secondary education at the National Finance-and-Economics High School in Sofia with a profile in machine processing of information. After that he got a Bachelor’s degree in freight forwarding, transportation, and logistics at the Baden-Wuerttemberg Cooperative State University in Loerrach (Germany).

During his university education, he worked and served as an intern in a large forwarding company in Switzerland. He obtained a Master’s degree with a major in Management for Organizational Excellence at the School of Management of the New Bulgarian University. Iavor is a member of the Managing Board of the National Association of Bulgarian Forwarders (NSBS) and Co-chairman of the Transport and Logistics Committee of the Confederation of Employers and Industrialists in Bulgaria (KRIB).

He believes that the main factor for success is the ability to analyze and manage the information and the processes. He holds to the maxim that a team is motivated with trust, encouragement, training, and personal example.

He believes that for a person to be successful, he must continually learn and acquire new knowledge and skills so that he would be able to create know-how and experiences. He is a regular guest lecturer in schools, universities, and at conferences. Besides his interest in forwarding and logistics, Iavor also has a strong interest in the fields of information technologies and law.

Married with three daughters, in his spare time he loves to travel with his family and to practice extreme sports. 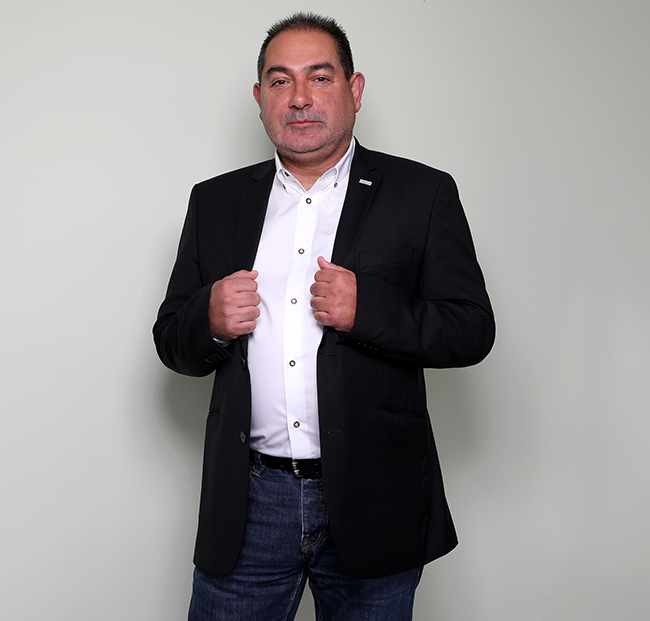 „Don’t make your colleagues do anything that you yourself would not do.“

Nikolay Nochev is the manager of Eurosped OOD and a member of the Board of Directors at Eurosped Group. He is responsible for organizing the international transportation. Besides, he also manages the internal distribution through Eurocourier.

Born in the town of Svishtov, he graduated from the First English Language School in Sofia, and later from the School of Law at the Sofia University “Saint Kliment Ohridsky”. He is married and has a daughter. During his studies at the University, he met Stoyan Stoyanov, the founder of Eurosped AD, and began working as an intern in the organization. At that time, Eurosped had only one office, a small rented warehouse, and a team of 10-12 employees. Nikolay Nochev witnessed how year after year the company kept growing. All the while the company has been growing, he also grew in his career in it. His position progressed from an intern to a forwarder, then to a team leader, then to department head, and is now the manager of the international and domestic road network.

Nikolay Nochev defines his work at Eurosped as interesting and dynamic. He believes he made the right choice to develop his career path in it. He is extremely keen on having good communication with the customers and on serving them well, and he does his best to instill the same kind of conduct, thinking, and attitude in the employees. He is confident that if everybody had this kind of thinking, Bulgaria would be moving in a better direction.

In his manner of work, he follows many rules, but the most important one that he observes is the following: “Don’t make your colleagues do anything that you yourself would not do.” Nikolay Nochev believes that a manager must be able to put himself in the shoes of his employees, and when he requires something from them, he should be reasonable, not demanding something which is impossible, nonsensical, or a lost cause. 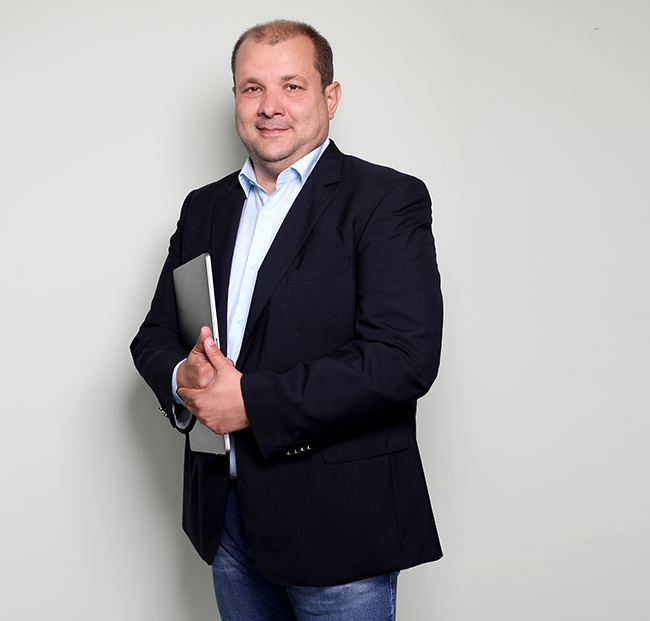 „If you want a reward, go ahead and take it!“

Minko Lazarov is a managing partner of Technical Solution OOD and a member of the Board of Directors at Eurosped Group. Technical Solution was established in 2008, its main line of business being the development and maintenance of IT infrastructures and innovative IT solutions in the private business sector of Bulgaria. Minko is an absolute professional in the management, analysis, and optimization of the logistics processes and beyond, having longstanding experience in the management of large computer networks. He has worked for some of the largest telecommunication providers in the country, among which Eurocom, Neterra, and Mobiltel.

A yet another innovative project of Lazarov, worthy to be applauded, is the development of an ERP solution entirely and only according to the needs and specifications of the first privately owned forwarding, transportation, and logistics company in Bulgaria – Eurosped.

Minko is also active in lecturing younger and older students, relating his powerful life story. Being himself the child of university teachers, with his great heart he supports the youth of today to discover their life’s path — such as they want it to be.

Minko gets charged by doing sports such as cycling and mountain climbing.  The most recent inspiration which is destined to imprint a valuable mark on his life is his family and his little daughter Dariya. 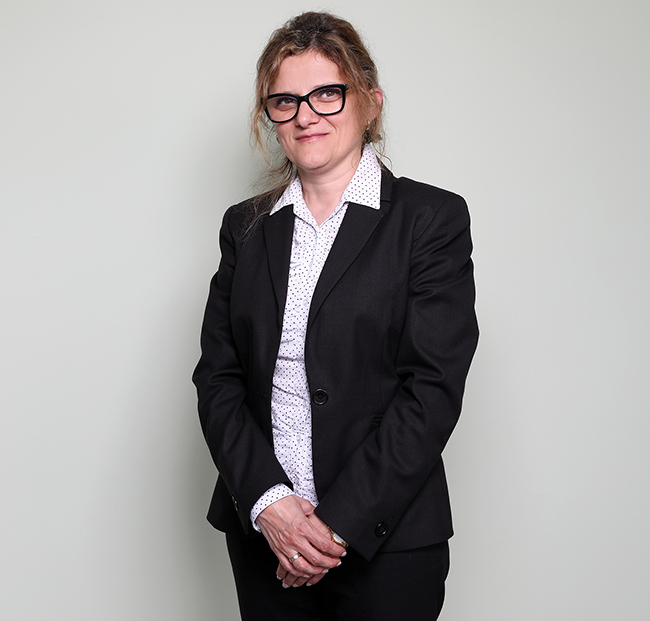 Elena Borisova leads, organizes, controls and is responsible for the whole financial and accounting activities of the companies in the group.

She was born in Sofia and she graduated from the University of National and World Economy – specialty Finance. She is married and has two children. She has been working at Eurosped as a Chief Accountant since 2009.

Here is what Mrs. Borisova says about the work environment in the group company: “The companies at the group have extremely various work matter which makes my work challenging and requiring knowledge and improving the finances of various economic activities.

At the beginning of my career path at Eurosped I was attending financial-accounting seminars. When unrelated topics to the activities of the companies in the group were presented, I decided I should not get involved deeper into the matter. Then just a few months after that, the specific case would turn into mine as well. That’s why I know there is no financial accounting issue that does not concern me directly – now or in the near future as the company is constantly developing and looking for new business opportunities on both the national and international markets.”